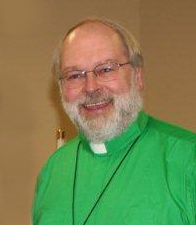 I grew up in Spooner, Wisconsin and had a personal relationship with Jesus Christ as my Lord and Savior ever since I can remember. My parents prayed with us and had devotions at home with my sister and me every day. They brought us to Church every Sunday and I was active in Sunday School, Bible School, Youth Choir, and Luther League at Trinity Lutheran Church.

Upon graduation from Spooner High School I attended Concordia College, sang on one of their Gospel Outreach Teams, and earned a Bachelor of Science degree in Religion and Elementary Education. I then went on to seminary, worked as a youth director, and served my Internship year at St. John’s Lutheran Church in Webster, South Dakota. Completing my Internship I continued my education in Israel on a work/ study program where I lived on a Kibbutz and worked and studied Hebrew. Upon completion of a Master of Divinity degree I was called to serve with the Namekagon Area Team Ministry in Spooner, Wisconsin. This ministry was a united ministry between Trinity Lutheran Church of Spooner, Calvary Lutheran of Minong, First Lutheran of Stone Lake and the United Congregational Church of Christ at Earl.  I served as an interim pastor for both First Lutheran and The United Congregational Church of Christ.

After this interim call I returned to school and earned a Master of Sacred Theology degree from Wartburg Theological Seminary. As a requirement for this degree I completed two years of Clinical Pastoral Education at Rusk State Hospital in Rusk, Texas. There I ministered to the mentally ill offender in a maximum security unit and to adults and children with mental illness and mental retardation. I was then hired to serve as a chaplain to those with mental retardation at Austin State School in Austin, Texas. After serving there for five years I was called as chaplain to Waco Center for Youth, a residential treatment center for emotionally disturbed adolescents in Waco, Texas. During this time I went back to seminary and in 1997 earned a Doctor of Ministry degree in Pastoral Care and Counseling from the Lutheran School of Theology at Chicago and was certified as a Fellow in the American Association of Pastoral Counselors.

During my last 10 years at Waco Center for Youth I was also appointed as the Head of Chaplaincy Services for the 22 hospitals and residential facilities of the Texas Department of Mental Health and Mental Retardation. In 2005, after my father died, I retired from 24 years as a Texas State Chaplain and moved back to Spooner to keep an eye on my mother.

Since 1987 I have also worked with Shalom Music in Jerusalem, Israel where each year we record a music album about Jesus the Messiah and give it away to hospitalized soldiers and to Messianic congregations that request them. In 1997 I became an Israel Prayer Watch group leader with Operation Outreach located in Canada and started a local group to pray for the people of Israel and the Peace of Jerusalem as recorded in Isaiah 62:7. In 2005 Operation Outreach appointed me as the International Prayer Coordinator for Israel Prayer Watch groups outside of Canada.

My heart’s desire is in searching the Scriptures to see the Old Testament Prophecies that were fulfilled in the life and ministry of Jesus the Messiah and that I may share them with others in order that our knowledge and faith in Jesus Christ would grow deeper each day.